Special Topics: Description of the MS

The Cover and Binding of the Voynich MS

In a collaboration between the Beinecke library and the University of York (UK) in July 2014, eraser crumb samples were taken from approximately 10 places in the MS, and on my recommendation also from the cover. These were sent to a York in order to identify the species of the animal from which the parchment was made. This is achieved by extracting protein from the samples and matching them with samples from known species (1). While for all folio samples the species was identified as 'cow', the cover sample could not be matched to any species. However, in November 2014 the professional parchment maker Jesse Meyer of Pergamena identified that the cover parchment is made of goat skin (2). 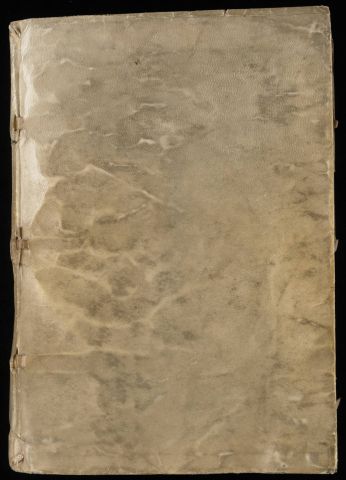 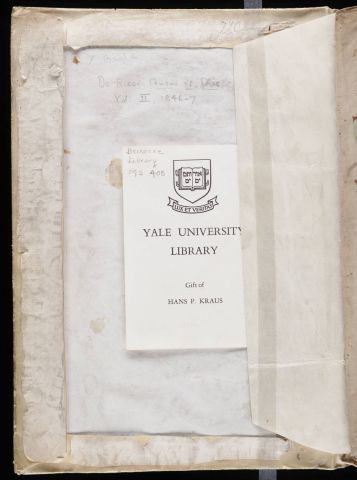 While the official Yale description of the MS cover calls it a limp vellum cover, this is not what it was originally. It used to be stiffened by filling materials. The cover also shows remnants of paper pastedowns (see right-hand picture above) that have been removed. The pastedowns and the filling materials were almost certainly removed by Wilfrid Voynich himself, shortly after he acquired the MS. This is discussed further below.

The cover of the Voynich MS is very similar to that of other manuscripts that Voynich acquired at the same time, e.g. a Boccaccio MS now in Chicago, and a Petrus Candidus MS now in Harvard (3). In these manuscripts we can see that new paper pastedowns have been added.

That this collection of mansucripts has been rebound is briefly mentioned in the catalogue of Vat.Lat. 11414-11709, written in 1959 by Mgr. J. Ruysschaert (5), where we read that this was done by the Jesuits of the Collegium Romanum. From all this we know that the present cover of the Voynich MS was added (presumably replacing an earlier one) by the Roman Jesuits, i.e. after the MS was received by Kircher.

The earlier cover of the MS has not been preserved, but we are able to learn something about it from forensic analyes. There are insect holes in the first and last folios of the MS. As pointed out by the conservators who inspected the MS for several hours in the Folger Library in Washington in November 2014, these insects are not at all interested in parchment, but in wood. From this, it could be concluded that the original binding of the MS almost certainly had wooden boards. The woodworms just nibbled at the first and last pages and the location of the wormholes matches well with the places where the insects could move in and out of this cover. From discolouring on the first and last folios it was furthermore concluded that these wooden boards were covered by tanned leather (see note 2). Interestingly, Manfred Staudinger, who has researched the account ledgers of Rudolf II preserved in Vienna, once remarked that the Voynich MS could hardly have been owned by Rudolf II, because it should have had a very different binding. This objection has now been explained.

Research performed by staff of the Historical Archives of the Gregorian Library in Rome, which has been recorded in their blog (6), tells us that the MS collection was described, sometime in the 18th Century, as old books infested by worms. The manuscripts were subsequently rebound. The Boccaccio MS mentioned above seems to have undergone a similar fate, as it has quite similar insect holes as the Voynich MS (7).

It was also mentioned above that the pastedowns were probably removed by Voynich. The habit of Voynich to search in covers of old books has been recorded in Zimmern (1908) (8), who writes:

[Voynich] knew that when a book is bound in vellum it may hide in its heart unexpected treasures. Hence it was reserved for him to make the quaintest and most valuable discoveries in the backs of the old bindings. Voynich never discards a book until he has stripped it of its cover. Here often the most priceless finds are made - a fact few even among book lovers know. For in the days before commercial cardboard was known, to stiffen the backs and sides of a book everything that was available was used and pasted together to make a compact mass. Hence the binder packed in much then held mere waste stuff, now often worth its weight in [5-pound] notes.

When the book came into the possession of Kraus, the cover was largely detached. Following is a picture of the sewing structure of the MS (9), which was also studied intensively in 2014: 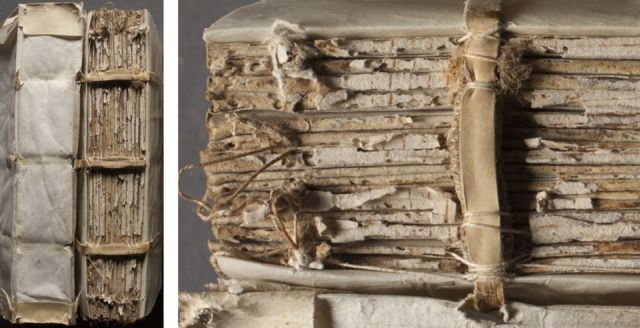 This shows a combination of details from different ages. It also includes modern repairs, from the time that Kraus owned the MS, as described on the inside back cover (see also below).

The leather supports, clearly visible in the above pictures, were added on this occasion, and glued on top of the older flax fiber supports. This was a repair made in order to stabilise the binding. The white thread visible in these figures also dates from the same repair. There are remanants of an old paper lining, which appears equally affected by insects. Furthermore, conservators detected very tiny fragments of leather attached to this area during their 2014 investigations.

While it is clear that the cover was replaced by the Jesuits in Rome, the question remains whether they also replaced the supports and/or redid the stitching. During the expert workshop at the Folger library in November 2014, the stitching was considered to be old, an opinion that was also reflected in Zyats et al. (2016) (see note 2) and in Touwaide (2016) (10). The following illustration shows one of the supports in more detail, even when mostly hidden behind the modern leather repair: 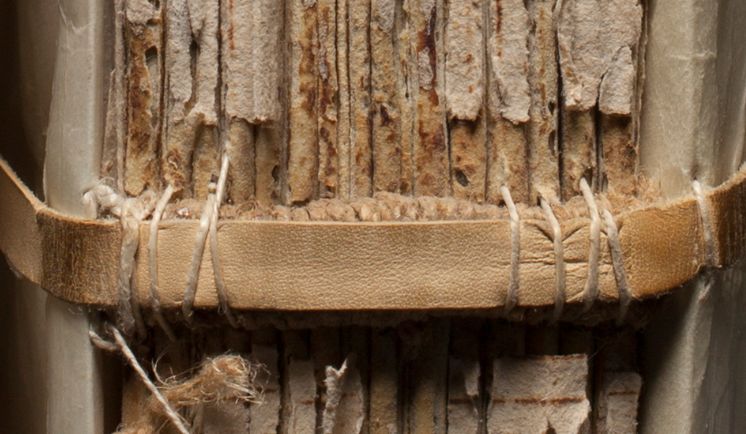 While these flax supports have been clearly judged to be old (and perhaps even original, i.e. from the fifteenth century), the recent digitisation of two of the manuscripts from the same Jesuit collection that is now in the Vatican library (11) shows that apparently similar fiber thongs have been used for these manuscripts:

Yale library experts have indicated that these are only superficially similar, yet differ in important details (12). Some records of the repairs to manuscripts in the Collegium Romanum library have been preserved (13), but these have been researched and did not provide furter information. Further information related to the collection now in the Vatican Library may help to provide a further answers.

Finally, in March 2021 the Russian researcher Wladimir Dulov has made a painstaking analysis of the detailed digital image of the sewing structure (parts of which have been shown on this page), combined with all visible aspects of the sewing in the Voyich MS in the Beinecke digital library, and has summarised his findings in two detailed blog posts: >>part1 and >>part2. These texts are in Russian, but can be translated adequately by Google Translate. A full summary of this interesting work cannot yet be provided here, but he identifies up to eight different types of thread, clearly confirming the long history of changes to the sewing structure, and makes a number of interesting suggestions with respect to changes in the quire ordering in the MS.

Pencilled annotations on the inside cover

The handwriting is different for the three items. The code 'J 1022' is similar to annotations found in one other MS once owned by Voynich (14) and this is almost certainly one of Voynich's internal catalogue references. Since it is written on top of the remnants of the torn out pastedown, it was definitely written after the MS changed ownership from the Jesuits to Voynich.

The 'Bsafe' entry was made by H.P. Kraus (15). This is a type of shelf mark he reserved for his most valuable items. The last entry refers to the description of the Voynich MS in De Ricci (1937) (16) and must therefore have been made after 1937. The handwriting is undoubtedly that of Anne Nill.

On the inside back cover we see:

The abbreviation HLH refers to Hellmut Lehmann-Haupt, a famous bibliographer who was also a consultant to H.P.Kraus (17). This describes the repairs made by them, that were already mentioned above. Below the number 7484 at the bottom there is another erased item, and this is a combination of a stock/inventory number by Kraus, and an erased price code (see note 15).

1
A description and examples of the application of this technique may be >>seen here.
2
As reported also in Zyats et al (2016).
3
These two manuscripts are identified as J14 and J17, respectively, in this table.
4
The link between this collection and Voynich's larger acquisition that included the Voynich MS is explained in detail on this page.
5
See Ruysschaert (1959).
6
In particular the following blog entry in Italian: >>Corpi di libri antichi da mandare al legatore.
7
Already remarked some years ago by Ellie Velinska.
8
See Zimmern (1908). I am greateful to Rich Santacoloma for the reference.
9
Picture taken from my Voynich MS presentation in the Folger Shakespeare Library in Washington, on 11 Nov. 2014
10
See Touwaide (2016).
11
MS >>Vat.Lat.11559.
12
MS Paula Zyats, priv.comm., September 2020.
13
When I was, in May 2012, in the Italian national library in Rome (BNCR), the very helpful curator of manuscripts Dr.ssa. Breccia suggested that I consult one of the manuscripts in the Fond Gesuito, (MS.Ges.1395) which I did. I had opportunity to study it in more detail in 2019, and could not find any reference to any of the present collection.
14
Discussed in the course of this page.
15
I am grateful to Peter Kidd for this information, and can refer to his >>web page describing Kraus' markings in manuscripts he owned.
16
De Ricci (1937)
17
I am grateful to Mr. D. De Simone of the Folger Shakespeare Library (formerly curator of the Rosenberg collection in the Library of Congress) for this information.