In 1639 the Prague citizen Georgius Barschius wrote a letter to the Jesuit Athanasius Kircher in Rome, which included the above lines. He explained that he owned a mysterious book that was written in an unknown script and that was profusely illustrated with pictures of plants, stars and chemical secrets. 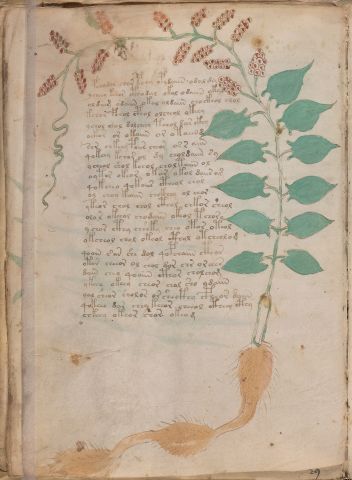 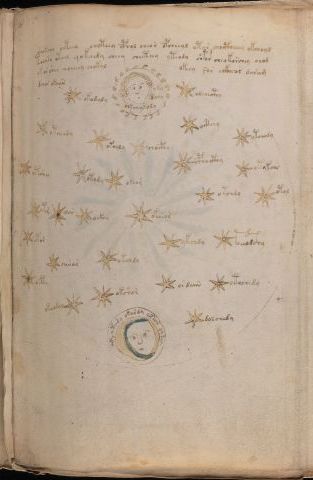 Barschius said that he could not read the text, and he hoped that Kircher would be able to translate this book for him. As far as we can tell, Kircher did not succeed in this.

This book later passed through various hands and it ended up in the Beinecke Rare Book and Manuscript Library of Yale University. It is now known as the "Voynich Manuscript (MS)". It is a medieval handwritten book of almost 250 pages, and even today the text cannot be understood. It has become quite famous, and it is recognised as one of the main unsolved problems in the history of cryptography.

While nobody has been able to find an explanation for the text, the book just seems to be waiting for someone to achieve this. In fact, there are plenty of people who believe that they have done this. Many new translations of parts of the MS, individual pages, or even individual words are proposed each year. The problem is that none of these is sufficiently convincing to be accepted.

The book is preserved in the Beinecke Library since 1969, where it is officially known as MS 408, but it is better known by its nickname. It was named after Wilfrid Voynich, an antiquarian book dealer who brought it to light in 1912. We may use his own words to describe this event (2), although we have to keep in mind that not all of his statements are necessarily reflecting the truth. This is because he bought the MS under the condition of absolute secrecy about the details of the sale.

In 1912 [...] I came across a most remarkable collection of preciously illuminated manuscripts. For many decades these volumes had lain buried in the chests in which I found them in an ancient castle in Southern Europe
[...]
While examining the manuscripts, with a view to the acquisition of at least a part of the collection, my attention was especially drawn by one volume. It was such an ugly duckling compared with the other manuscripts, with their rich decorations in gold and colors that my interest was aroused at once. I found that it was written entirely in cipher. Even a necessarily brief examination of the vellum upon which it was written, the calligraphy, the drawings and the pigments suggested to me as the date of its origin the latter part of the thirteenth century. The drawings indicated it to be an encyclopedic work on natural philosophy.
[...]
the fact that this was a thirteenth century manuscript in cipher convinced me that it must be a work of exceptional importance, and to my knowledge the existence of a manuscript of such an early date written entirely in cipher was unknown, so I included it among the manuscripts which I purchased from this collection.
[...]
two problems presented themselves - the text must be unravelled and the history of the manuscript must be traced.
[...]
It was not until some time after the manuscript came into my hands that I read the document bearing the date 1665 (or 1666) (3), which was attached to the front cover.
[...]
This document, which is a letter from Joannes Marcus Marci to Athanasius Kircher making a gift of the manuscript to him, is of great significance

The Prague physician and scientist Johannes Marcus Marci had been a faithful correspondent of Athanasius Kircher for 25 years. Sometime before his death he sent the manuscript to Kircher. The MS was accompanied by the letter mentioned by Voynich (see note 3), in which Marci explains how he had inherited the manuscript from a close friend, who had tried to decipher it until the end of his life, and had also asked for Kircher's help. This friend was Georgius Barschius, whose letter was cited above.

Voynich took the manuscript to London in 1912, and later (January 1915) to the United States. He always called it his 'cipher MS', and occasionally he provided photographic copies of pages of it to experts in various disciplines. The manuscript became famous when, in the 1920's, William Romaine Newbold proposed a spectacular partial translation of its text. This 'solution' was disproved by John M. Manly in 1931.

The manuscript has attracted the attention of the code-breaking experts ever since 1917, and in the 1940's and 1960's the eminent cryptanalysts William F. Friedman and Elizebeth Smith Friedman made several valiant attempts at deciphering its text. They were aided by groups of codebreaking experts, but also they did not find any solution.

In 2009 one of the many questions surrounding the manuscript could be resolved. The parchment of the manuscript was radio-carbon dated resulting in a date range of 1404-1438 with 95% confidence.

The following is only a very brief description of the MS. A more extensive description is provided on the next page.

The Voynich MS is a parchment codex of 22.5 x 16 cm, with its leaves numbered up to 116, of which 14 are now missing. Its cover, also parchment, is blank: it does not indicate any title or author. The manuscript is written in an elegant, but otherwise unknown script.

What does the Voynich MS say?

The text of the manuscript is still a mystery. It is tempting to assume that the text relates to the illustrations, but this is not certain. There have been many suggestions about the historical importance of the Voynich MS, ranging between opposite extremes, including:

This list could be extended further. So far, we are not able to answer the most basic question, namely whether the text is plain language, encrypted language, constructed language or entirely meaningless. It is not the purpose of this web site to address all possible interpretations that have been proposed. While there are numerous web sites presenting a great variety of proposed solutions, occasionally accompanied by long discussions, none of these can be considered correct. A correct explanation of the text should be easily recognised as such, and not require a lot of explanation or discussion.

The manuscript continues to attract people from all over the world, primarily because of the mystery of its unreadable text, but there is more to it. For some reason, it allows just about everyone to recognise something in it. It has something that makes so many people believe that they can solve this mystery. Anyone reading this, who believes that he/she has found the solution, please see the last question in the FAQ.

Voynich once stated that the book would become more valuable as soon as it has been deciphered, but this is hardly true. Its mystery and its resistance to translation is what makes it special (4).

In addition, there are a detailed Table of Contents, and a Site Map with further information about this site.

1
This quote is from the 1639 letter of Georgius Barschius to Athanasius Kircher, which represents the second oldest historical reference to the Voynich MS.
2
This is quoted from Voynich (1921).
3
The correct year is 1665. The letter is presented here.
4
Paraphrasing Reed Johnson in The New Yorker, >>July 9, 2013.